I had decided on Thursday or Friday that I was feeling good enough after the Mobile marathon last week (day 13) to go to the expo & register for the Baton Rouge marathon. Hard to pass one up thats about 30min away! 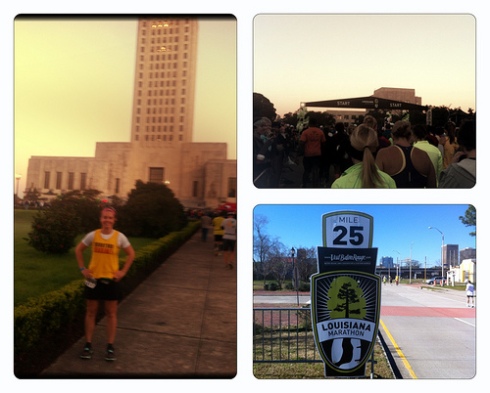 I was a little nervous as I was going to try out some new nutrition again, and last week didn’t go that well. I’m a real-food eating proponent and after the last couple of marathons (last year), I decided to try to stop using “sports food” during races. I never feel good eating/drinking them, and my stomach usually gets upset. If I’m going to feel bad anyway, I can at least try it eating real food.

The short version is, I felt GREAT the whole time, even after doing one last week. No dizziness, no pain, and I was able to actually tolerate my food. Success! Not fast by any means, but within my normal “average” times. Now, if I just start to run train more, I could get faster again. 🙂 However, I just love CrossFit too much to want to put in that many run miles. My strength carries me through a couple marathons a year, I’m ok with that.

Of course, here’s some pictures. My FAVORITE aid station was the Duck Commander theme. You’ve seen Duck Dynasty, right?! They’re my people. They were all in cammo, using duck calls to cheer people on. They were SO much fun!

For all you Marathon Maniacs out there, this was a GREAT race (Louisiana Marathon). Smaller than RnR series (ugh), but the course support was GREAT, the scenery beautiful and so many community members out with their own aid stations in their front yards. The post race jambalaya cookoff was fun, the big bands…truly a top-notch race, even with less than 5k people! The race org did a great job. HIGHLY recommend.

Here is what I wrote where I log my workouts:

“I don’t know if I was overly cautious, but I was so worried about going to the bathroom before I left home and filling my ultra pack with coconut water, that I forgot ALL my energy bars/balls that I made (the same from last week)! I only had 4 packs of baby food, 3 sticks of pork jerky (no nitrates, no sugar, local…) and 3 pieces of bacon with me. Yeah. When I realized that at the start, I was so mad at myself. NO way was this race going to be better without my Paleo food! WTF. Sure it was hot & I didn’t have salt last week, but those baby foods are only 60 calories…not enough to sustain a 5-6 hour effort! WTF! So thankful my sherpa went to Whole Foods after the start, and met me at mile 11 with extra baby food packets & emergency (not paleo) energy bars just in case. I didn’t end up needing them though! It was so much better than last week, to have help if I needed it.

New Plan (since I forgot my bars): every 45min-1hr alternate a baby food or jerky/bacon. Every even # mile, have coconut water, every odd, have water.

My primary goal was “a better race than last week”, meaning I didn’t want to feel as horrible during the race. I just wanted to feel better.

Second, if things were ‘ok’ I wanted to not be slower. Which I anticipated would be possible if I didn’t feel as bad.

Third, if things went great, I wanted to beat the time, even by 5min.

As the race went on, 5 miles, 8, 10…I said to myself, “by 10 last week I was feeling really horrible, feeling good today!”…so I kept the walk breaks to the aid stations and kept on. I kept reevaluating and I kept waiting for the wheels to fall off…they never really did! So I kept moving my “goal” up.

15,16,18…no wall. I was running (slowly) without breaks consistently between aid stations. By mile 19–the end, I was just cruising past people.

Sure things got tight. My hamstrings were hurting a little, my ankle (the one I broke in 2008) was giving me sharp pain (strange, that never happens) and my hips were sore. BUT, I was still ‘running’ at mile 25. No wall…no cramps…no dizzy…

Even K gets surprised by this. He just keeps saying, “do you know how good you could be if you trained? How many people go and do that? Just decide on a Friday morning to do another marathon, and beat your time from last week?” As we were walking to the car and I said, “I easily have another 5-10miles in me!”

Sigh. Sport specific training is just so…boring. BUT, if I can continue to get in better shape…my marathon times will drop like they did several years ago. I’m getting there. AND in a ‘healthy’ (real food based) way. Doing marathons isn’t really healthy, I know this. But, I love them.”